Tiếng Anh Kỹ Thuật
Home Uncategorized How are watches made ?

The oldest means of determining time is by observing the location of the sun in the sky. When the sun is directly overhead, the time is roughly 12:00 noon. A slightly later development, and one less subject to an individual’s judgment, is the use of a sundial. During the daylight hours, sunlight falls on a vertical pole placed at the center of a calibrated dial, thus casting a shadow on the dial and providing the reader with a relatively accurate time reading.

The invention of the mechanical clock in the fourteenth century was a major advancement—it provided a more concise and consistent method of measuring time. The mechanical clock includes a complicated series of wheels, gears, and levers powered by a falling weights and with a pendulum (or later a wound-up spring). These pieces together moved the hand or hands on a dial to show the time. The addition of chimes or gongs on the hour, half hour, and quarter hour followed soon afterward. By the eighteenth century, smaller clocks for the home were available, and, unlike their predecessors, were closed and sealed in a case.

The more exacting the workmanship of the moving parts, the more accurate the clock was. From invention through to the middle of the twentieth century, developments in clock- making focused on making the moving parts work as accurately as possible. Developments in metal technology and in miniaturization, the lubrication of small parts, and the use of first, natural sapphires (and then artificial sapphires) at the spots that received the most stress (the jeweled movement) all became integral components of horological science.

Small pocket watches, perhaps two to three inches (five to seven centimeters) in diameter, were available by the end of the nineteenth century. Mechanical wristwatches were an everyday item in the United States by the 1960s. And yet, the central problem faced by watch and clockmakers remained the same: mechanical parts wear down, become inaccurate, and break.

In the years immediately following World War II, interest in atomic physics led to the development of the atomic clock. Radioactive materials emit particles (decayed) at a known, steady rate. The parts of a mechanical clock that ratcheted to keep the time could be replaced by a device that stimulated the watch movement each time a particle was emitted by the radioactive element. Atomic clocks, incidentally, are still made and sold, and they are found to be consistently accurate.

With the development of the microchip in the 1970s and 1980s, a new type of watch was invented. Wristwatches that mixed microchip technology with quartz crystals became the standard; there are few non-quartz wristwatches made today. The microchip is utilized to send signals to the dial of the watch on a continual basis. Because it is not a mechanical device with moving parts, it does not wear out.

The most accurate quartz watches are those in which the time appears in an electronically controlled digital display, produced via a light-emitting diode (LED) or a liquid crystal display (LCD). It is possible, of course, to have the microprocessor send its signals to mechanical devices that make hands move on the watch face, creating an analog display. But because the hands are mechanically operated through a portion of the watch known as a gear train, analogue watches usually are not as accurate as digitals and are subject to wear. Both types of watches achieve tremendous accuracy, with digital watches commonly being accurate to within three seconds per month. 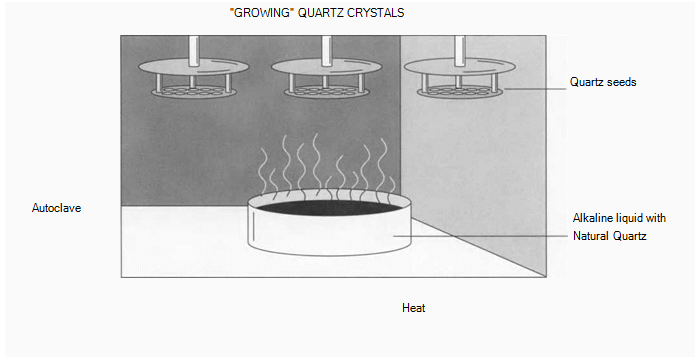 (The heart of a quartz watch is a tiny sliver of quartz. In a natural form, quartz is first loaded into a giant kettle or autoclave. Hanging from the top of the autoclave are seeds or tiny particles of quartz with the desired crystalline structure. An alkaline material is pumped into the bottom of the autoclave, and the autoclave is heated to a high temperature, dissolving the quartz in the hot alkaline liquid, evaporating it, and depositing it on the seeds. After about 75 days, the chamber can be opened, and the newly grown quartz crystals can be removed and cut into the correct proportions)

Electronic watches make use of many of the most modem materials available, including plastics and alloy metals. Cases can be made of either plastic or metal; watches with metal cases often include a stainless steel backing. Microchips are typically made of silicon, while LEDs are usually made of gallium arsenide, gallium phosphide, or gallium arsenide phosphide. LCDs consist of liquid crystals sandwiched between glass pieces. Electrical contacts between parts are usually made of a small amount of gold (or are gold- plated); gold is an almost ideal electrical conductor and can be used successfully in very small amounts.

This section will focus on quartz digital watches with LED displays. Although the assembly of such watches must be performed carefully and methodically, the most essential aspects of the manufacturing process are in the manufacture of the components.

1 The heart of a quartz watch is a tiny sliver of quartz. The synthetically produced quartz is cut by the manufacturer with a diamond saw and shipped to the watchmaker to use. The production of “grown” quartz is a critical step in the process.

Quartz, in a natural form, is first loaded into a giant kettle or autoclave (the same device used by doctors and dentists to sterilize instruments). Hanging from the top of the autoclave are seeds or tiny particles of quartz with the desired crystalline structure. An alkaline material is pumped into the bottom of the autoclave, and the autoclave is heated to a temperature of roughly 750 degrees Fahrenheit (400 degrees Celsius). The natural quartz dissolves in the hot alkaline liquid, evaporates, and deposits itself on the seeds. As it deposits itself, it follows the pattern of the crystalline structure of the seeds. After about 75 days, the chamber can be opened, and the newly grown quartz crystals can be removed and cut into the correct proportions. Different angles and thicknesses in the cutting lead to predictable rates of oscillation. The desired rate of oscillation for quartz used in wristwatches is 100,000 megaHertz or 100,0  oscillations per second.

(In watch assembly, the entire set of crystal and microchips is set onto a circuit board. A battery is also installed that generates electricity for the quartz crystal and supplies the power for the LED display)

2 To work most effectively, the piece of quartz needs to be sealed in a vacuum chamber of one sort or another. Most commonly, the quartz is placed into a sort of capsule, with wires attached to both ends so that the capsule can be soldered or otherwise connected to a circuit board.

3 The electronic leads generated by a battery through the quartz (producing oscillations) will go to a microchip that serves as a “frequency dividing circuit.” Microchip manufacture, like the quartz, is also carried out by the supplier to the watch manufacturer. An extensive and complex process, making microchips involves chemical and/or x-ray etching of a microscopic electronic circuit onto a tiny piece of silicon dioxide.

5 The entire set of crystal and microchips is set onto a circuit board. The board incorporates a space to hold the battery that supplies electricity to the quartz crystal and supplies the power for the LED display. Generally, the space for the battery is on the outside of the surface facing the back of the case. The battery can be replaced by removing the back of the watch, shaking out the old one, and dropping in the new battery.

6 The mechanism used for setting the watch is then connected. This mechanism involves two pins that extend beyond the case of the watch. One pin lets the counter circuit know which reading to reset—seconds, minutes, or hours. The second pin is pushed a number of times to bring the display to the desired reading.

7 The entire circuit board, along with a battery, is then closed into a case, and a wrist strap is attached.

Because the microchips in a quartz watch are capable of holding large quantities of information, it is possible, from an engineering standpoint, to add other functions to a watch without much difficulty. An additional push button on the case connected to the counter circuit can provide alarms, tide information, and more. The microchip can just as easily be programmed to set the watch forward or back a defined amount at the push of a button, so that an owner can determine the time in another time zone, or perhaps have two, three, or more time zone times displayed successively.

All components of electronic watches are manufactured under a strict system of quality control. Quartz crystals, for example, have their frequencies tested before being used in a watch. Microchips must be made in a “clean room” environment with specially filtered air, since even the tiniest dust particles can render a chip useless. Microchips are examined carefully and are also bench tested for accuracy before use.

After a watch is manufactured, it is again tested before being shipped to market. In addition to its time-keeping accuracy, it is also subjected to a drop-test in which it must continue to operate properly after being dropped and otherwise abused; a temperature test; and a water test. While a watchmaker may, with proper testing and proof, claim that a watch is “water resistant” at certain, known specifications, it is inaccurate to say a watch is “waterproof’ because without particular specification that designation is meaningless.

Large watch companies make all of their own components, ensuring that product quality standards are in place at the earliest point in the manufacturing process.

Because today’s electronic watches are by design so accurate, accuracy is not the only goal for which a watch manufacturer aims. Future changes in product will take advantage of other technologies from other fields such as the addition of a calculator function to a watch, or even the addition of a radiotransmitter that can send out a traceable signal if the wearer is lost or in trouble.